Did you leave your car at home during the week of June 2 – 8?

The Commuter Challenge is a national week-long event with a strong workplace focus, where employers are encouraged to promote more sustainable commuter modes like walking, cycling, in-line skating, public transit, carpooling and teleworking.

At Morrison Hershfield, sustainable commuting is not a one week pursuit. Reducing our commuting and transportation impact remains one of our most significant environmental opportunities and as such, we have several company-wide efforts in place to reduce our collective transportation impacts. Proximity to public transit is a consideration in the selection of our office locations. We encourage and help facilitate carpooling to and from work and for other work-related travel. Many offices include amenities that enable sustainable commuting options, including charging stations for employees with hybrid or electric vehicles, bike storage and bike repair stations. We also have a telework program and use videoconferencing equipment to reduce the need for long-distance travel for internal and client meetings and events.

Active and sustainable transportation is encouraged all year long, but participating in the Challenge is FUN!  For one week, the Commuter Challenge measures and tracks the impact of each registered participant and the cumulative impact of each registered workplace on the environment.  It increases awareness, creates a little friendly competition within and between workplaces and cities, and provides an incentive for commuters to try something new.

Thanks to the efforts of the 17,472 individuals who took part, 233,283 kg of CO2 was avoided during the week.  Choosing sustainable commuting methods promotes employee wellness, decreases air pollution, reduces traffic congestion, and lowers greenhouse gas emissions.

How did we do?

Morrison Hershfield registered all of our offices for the Challenge again this year.  We had over 120 employees from 13 offices across Canada, the U.S. and India participate.

Our Calgary office had the highest participation rate among Morrison Hershfield offices with 65% of staff taking part.  This also happened to be the highest among all workplaces in Calgary!  Congratulations to the Whitehorse office who boasted a 54% participation rate, second highest at Morrison Hershfield and first among workplaces in the City of Whitehorse! 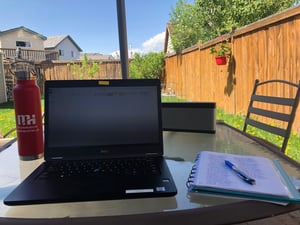 Some of the notable achievements of individual Morrison Hershfield staff during the week included: