Our climate is changing.  Now more than ever, we are paying increased attention to the significant risks of climate change on the performance of engineered transit systems and public safety.  Engineers, decision makers and other stakeholders are beginning to see the benefits of including climate change adaptation as part of their primary mandates. Vulnerability and risk assessments are becoming important steps to ensuring climate change is considered early in the engineering design, operations and maintenance of civil infrastructure. 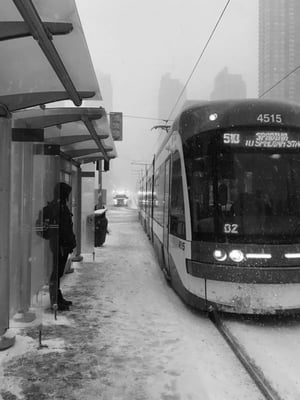 Understanding the components of transit infrastructure that are highly vulnerable to extreme weather conditions and climate change impacts allows for cost-effective planning and design, operations and maintenance.

The major steps in conducting a climate vulnerability and risk assessment include:

The Need for Climate Vulnerability Assessments

Our existing transit systems have already experienced the impacts of climate change, and we can expect more. Most transit infrastructure and operations function well under varied weather conditions, but some have been known to be vulnerable to extreme weather events, such as increased temperatures, increased severity of precipitation, higher wind gusts and increased freezing rain. A transit system’s vulnerabilities may include:

These climate change impacts could increase the risk of delays, disruptions, damage and failure across a transit system, severely disrupting the reliability, capacity and safety of the system.

The information gained from conducting a climate vulnerability assessment can be used to determine possible needs and prioritize investments to increase resiliency, identify areas where it is reasonable to direct new growth, and identify areas that should be avoided.

Why Transit Organizations Should Enhance Their Adaptive Capacities.

Policies related to climate change, resiliency and adaptation have already been implemented at federal, provincial, regional, local and corporate levels, and continue to evolve. For example, Infrastructure Canada’s “Investing in Canada Infrastructure Program” (ICIP) includes a horizontal requirement called The Climate Lens. This requirement is intended to incite behavioral change and introduce the consideration of climate impacts into the planning of infrastructure projects, including transit, with a view to implementing Canada's goals of a clean growth low-carbon economy. The ICIP Climate Lens, in part, employs a risk management approach to anticipate, prevent, withstand, respond to, and recover from a climate change related disruption or impact. So, depending on the program, funding stream, and the estimated total eligible cost of the project, it is possible that proponents of transit projects will be required to undertake a “Climate Change Resilience Assessment”.

A number of transit agencies, such as Metrolinx, have begun to include Climate Vulnerability Assessments into their mandates to strengthen their resiliency and adaptive capacity to climate related hazards. In 2017, Metrolinx produced a report titled Planning for Resiliency: Toward a Corporate Climate Adaptation Plan. The report, details their Vulnerability Assessment Pilot Project, which was an exercise meant to improve Metrolinx’s understanding of the vulnerability and risk of its assets to extreme weather events and climate change. The study resulted in:

Vulnerability assessments are now being considered for application across Metrolinx’s entire asset portfolio.  In fact, their Planning for Resiliency: Toward a Corporate Climate Adaptation Plan (2017) report suggests three reasons why all transit organizations should enhance their adaptive capacities in the face of a changing climate:

We conduct vulnerability and resiliency assessments to determine exactly where and what operations/ elements of your system are most vulnerable. The output of this exercise will provide data allowing you to perform an initial risk assessment for each operation or component of your transit system.

For more information on how we can help with your vulnerability and resiliency assessment requirements, please visit our Climate Resilience webpage or contact: