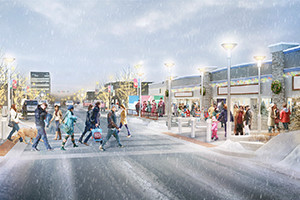 "The project is being recognized with an Award of Merit for its comprehensive and contextual approach to downtown improvements in Grande Prairie. The jury felt that coupling the recommended improvements with costs was a practical and important to moving the project forward into implementation. The jury recognized this as an important project for the City of Grande Prairie's revitalization of downtown," said Canadian Institute of Planners President Hazel Christy.

One of the fastest growing urban areas in North America, the City of Grande Prairie is currently the 7th largest city in Alberta, having more than doubled in size over just the last two decades.

With a median age of 30 years, this rapid growth of mostly young men and women within the Grande Prairie community has brought with it innovative businesses, new employment opportunities, expansions to art galleries and libraries, and even nationally recognized cultural performances and concerts.

While this rapid growth had brought many opportunities to Grande Prairie, it had also led to its own unique set of challenges.

One of the most pressing challenges confronting city officials and local businesses, infrastructure within the city had struggled to keep up with the influx of young families and new businesses. Water and wastewater, sewer and pipe maintenance had become a discouragingly complicated process, road and parking congestion were daily obstacles, and some roads were rendered almost impassable from accelerated wear and use.

As Grande Prairie has done many times during its recent rapid growth, city officials and local businesses insightfully approached these challenges by viewing them not as simple problems, but as opportunities for continued innovation and growth. Developing goals and visions to create greenspace and gathering areas for residents, Grande Prairie brought in Morrison Hershfield to assess subsurface and surface infrastructure, provide upgrade and intensification recommendations, and propose streetscape enhancements for the downtown area.

Engaging and workshopping with Grande Prairie City Council and the Downtown Association, initial ideas were generated and a strategic direction was set for the project team. Then, though broader public outreach, decision makers collected and evaluated citizen feedback to validate the design direction and inform the final proposed design.

The Downtown Infrastructure Assessment, Streetscape Enhancement, and Rehabilitation Project is a $20 million land use and development strategy in the downtown core that is being implemented over the next two years in a multiple stage process. The plan was put together by one of Morrison Hershfield’s most accomplished Alberta natives, Senior Department Manager Doug McRae, with support from NAK Design Strategies and Intelligent Futures.

“As with many downtown revitalization projects, there were challenges and competing interests to consider” Doug McRae said, “these were reviewed by the Council, directly with the Downtown Business Association, and with the public through an online questionnaire. Working with an engaged, knowledgeable and committed client in the City of Grande Prairie helped the project keep momentum through these difficult phases and a very workable solution was reached that gives the City a real plan backed by the community that will allow the Council to move forward in manageable stages.” 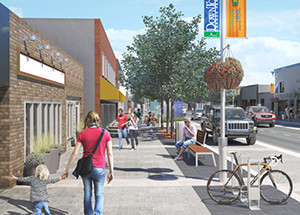 "The public engagement side generated over 1,700 respondents. The community was very engaged which to me made the project much more authentic and really dynamic. As a design team we can come up with many options, but it was the responses from the community that really allowed us to be really bold in the decisions that were made, for example the shared festival street," Raymon Yim, an associate with NAK Design said.

Along with each street having streetlights with banners, signage, park benches, bike racks, garbage bins, trees, enhanced sidewalks and crosswalks, there will also be a shared common square which will be created on 101 Avenue. The street will allow pedestrians and vehicles to share a common road along restaurant outdoor dining in a city square setting and atmosphere.

The extensive community engagement process guided the urban design recommendations through a bottom-up approach. Council, stakeholder, and public feedback informed the streetscape vision, which led to the creation of intensification scenarios, downtown street enhancement recommendations, and a detailed streetscape kit of parts, all tied together by an overarching theme that reflects the best of Grande Prairie, while at the same time promoting its modernization and vitality.

Morrison Hershfield will be formally recognized with the award at the joint Canadian Institute of Planners and L'Ordre des Urbanistes du Québec's National Planning Conference, Accent on Planning, held in Quebec City on Thursday, July 7.