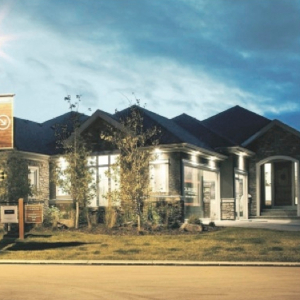 “Our team did an extremely good job of balancing earthwork on a site where over a million cubic metres of material was moved around,” said Ryan Gidluck, Vice President, “Our Water & Wastewater group did an very important job of providing the client with the most cost-effective water plant solution by adding on to the existing plant. On the wastewater side, the previous pre-planning that was done by the same group in 2008 lead to a very scalable plant layout that enables capacity to match demand.”

Between 2008 and 2009, we assisted in developing the vision for Artesia with several conceptual iterations and cost estimates along the way. By 2011, Artesia leveraged Morrison Hershfield to design and manage the initial phase of Artesia utilizing work completed in 2008 as a starting point.

“In Artesia, we made a conscious effort to narrow our roads and construct bio-swales to capture and manage overland drainage,” Ted Stack, Artesia’s vice president of land development told the Calgary Sun. “We reserved almost 50 percent of our 137 acres of land for open space, natural green space, amenity spaces, environmental reserve and municipal reserve to promote more sustainable land use. We are recycling storm water and reusing it to irrigate our common landscaped areas and our homesites. We anticipate that we will reduce potable water consumption by 60 million litres a year with our water conservation and management system."

“This was a large and challenging project that required a great deal of perseverance and teamwork on our part to pull off successfully,” said Ryan Gidluck. Morrison Hershfield congratulates Artesia on their well-earned achievement.