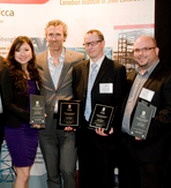 Capilano CLIFFWALK was the big winner at this year’s BC event. Awards of Excellence were won in both the Architecture and Sustainability categories, an exceptional achievement when considering the impressive competition. The Architectural category recognizes structures where architectural considerations had a predominant influence in the design of the structure and the Sustainability category looks for structures where steel has been re-used, recycled or used as part of a sustainable development project (LEED certification).

Considering the type of structure, design and construction techniques used for CLIFFWALK, it is considered to be the first-of-its-kind in the world. The steel structure required an iterative combination of surveying, design, fabrication, and erection methods which required collaboration in the steel design from the development of the concept through to commissioning. The advantage of the technology and the approach is that with site-specific customization, a commercially viable and dramatic ecotourism solution was provided while respecting the environment and maintaining a small ecological footprint. It has demonstrated that steel is an efficient, economical and sustainable construction material.

In Ontario, Morrison Hershfield won an Award of Merit in the Engineering Category for the $80M Re-Decking and Widening of Hogg’s Hollow Bridge at Highway 401, Toronto for the Ministry of Transportation of Ontario. The Engineering category takes into consideration buildings, bridges, process plants or other structures in which engineering considerations predominantly influenced the design and construction of the structure. With a total of over 1,200 tons of high-grade 350WT steel used, this was one of the largest bridge engineering projects using primarily structural steel in recent years. The installation was completed amidst the busiest traffic conditions in the country, with minimal disruption to the road users. The innovative solutions and careful sequencing of the works were a key factor in the completion of the project over one year ahead of schedule.

Formed in 1930, CISC is a non-profit industry association. CISC operates as a technical, marketing and government relations organization that promotes good design and safety, as well as the efficient, economical and sustainable use of structural steel.