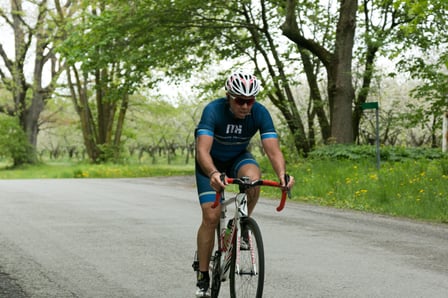 How excited would you be to face one of the longest and toughest climbs in Ontario? The Morrison Hershfield Racing Team was up for that challenge on Saturday, May 12th.

Just north of Cobourg, ON in a little town called Baltimore, ON, four members of the racing team participated in the Inaugural Northumberland Classic. Ian Chambers (No. 210), Doug Richards (No. 211), Donnie Smith (No. 212), and Sean Smith (No. 213), were only four of over 400 provincial, national and international cyclists of all ages to take part in the race, the first of its kind to be held in Northumberland.

The team faced a total 1,100 m (3,600 ft.) of elevation through the rolling hills of Northumberland. There was little to no wind, the sun was shining and the temperature was good, perfect weather for cycling.

The 90 km race was a true test of strength and endurance.  For some, the climbs were just too much, but it played to the strengths of two of our team members. Sean Smith of Morrison Hershfield took 4th place overall and Doug Richards took 5th place, only seconds behind Sean!

Next race for the team is the Steve Bauer Classic, a 60 km Ontario Cycling Association sanctioned Ontario-Cup (O-Cup) event, just outside of St. Catharine’s, ON.

Check back next week to see how they did!