They raced in seven cycling competitions between the months of April and June, anticipating thrilling rides and fantastic outcomes, just like previous years. However, the weather was very temperamental in Ontario this spring, and things don’t always go as planned. The team found out the season was more difficult than they thought it would be. How did the riders fare with the intense weather conditions and a bit of bad luck? Let’s recap each of the races for you to find out!

The cycling team this year included Sean Smith, Andrew Auld, Markus Rummel, Doug Richards, Kyle Orrick, Jan Pearson, George Badovinac, Carlos Vidal, Dom Roos and Donnie Smith; all passionate cyclists who are drawn to the physical competitive nature of the sport and the teamwork required to put a cyclist on the podium.

As indicated by the name, the first Ontario Cup race of the season happened on Good Friday on April 19th at the Canadian Tire Motorsport Park in Bowmanville, Ontario. The race was a difficult four kilometer circuit with ten turns and 50 meters of steep elevation changes. The only thing that could make it more challenging? A steady downpour and temperatures plummeting to 4 degrees Celcius.

Six Morrison Hershfield team racers started out strong, but shortly after start, they experienced a string of bad luck. Carlos got a flat tire early on in the race and fell behind the pack while Donnie veered off the track and was unable to catch the pack. All the while, the temperatures continued to drop and the rain continued to pour. The course got more and more treacherous as water pooled on the track. Half of all the racers in the competition were unable to finish due to hazardous conditions and near freezing temperatures. However, Sean, Jan and Andrew pursued on towards the finish line. “It was an accomplishment just to be able to finish,” said Sean. “I spent half an hour after the race shivering in my car with the heat on.” Hypothermia was a real risk at this race as the cyclists were not expecting temperatures that cold and were dressed for predicted temperatures of 8 degrees. “It was one of the hardest races I’ve ever done in terms of mentally staying in it,” said Jan. At the end of the day, Andrew, Sean and Jan finished the race in 7th, 11th and 12th respectively.

The next race of the season was the cross country Paris to Ancaster race; a Spring tradition that has taken place for the past 24 years. Inspired from the famous European race, Paris Robaix, people come from far and wide to attend. The race takes place on scenic trails, through farm fields and on paved and gravel roads and attracts both hobbyists and professional cyclists. The race hosts a collective 2200 riders who start in waves based on placements from previous years. As part of the top 100 last year, Sean, Markus and Doug were all in the elite first wave of starts. Once again, the cycling team was enthusiastic and up for the challenge, but once again back luck struck. Between muddy terrains caused by the wet spring weather, flat tires and tactical challenges, several of the racers did not finish as strongly as they would have liked. However, Doug Richards was Morrison Hershfield’s standout rider of the day and managed to finish 4th in his category. Congratulations Doug!

A criterium, otherwise known as a crit, is a timed race consisting of several laps around a closed circuit. Crits are known for their high speeds, tight corners and risky conditions due to the riders forming a tight pack with little room between them. The Ontario Police College Criterium took place on May 5th in Aylmer, Ontario. The course consisted of a 55 minute, relatively flat, 1.6 km circuit on the Police Vehicle Operations course. Jan was the only rider representing Morrison Hershfield for this event, which brought out some fierce competitors. “It was the fastest race I’ve ever done in terms of average speed. The race has gotten more competitive than ever,” said Jan who finished 17th. 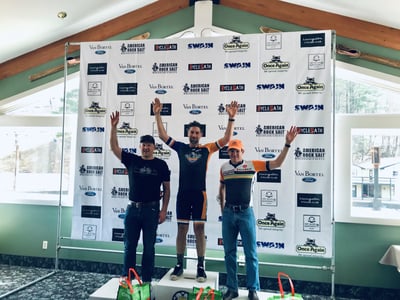 The Ossian Giant Gravel Grinder brought the Morrison Hershfield team a break from a string of back luck. Andrew and Doug represented Morrison Hershfield at the gravel race in Swain, New York. Over 80% of the 44-mile course takes place on unsurfaced gravel roads through backcountry, making it scenic but difficult. Andrew gave it his all and secured a 3rd place podium position for his category; the first podium finish of the season for the team. Way to go Andrew!

On May 18th, the cycling team geared up for the Steve Bauer Classic in Pelham, Ontario. This was also the provincial championship race and is a staple in the Ontario road race calendar. The hilly terrain with a 14.8% maximum grade makes it a very tough course. For Morrison Hershfield team member Sean, it is one of his favorite races to ride and traditionally, a race which Morrison Hershfield has done very well. What could go wrong? Well, the cycling team’s bad luck struck once again and unfortunately for Sean and the team, Sean was sick and unable to ride in his favorite race. Doug, Carlos and Donnie continued on, but once again, mechanical issues arose and Carlos’ chain broke, causing him to fall out of the race. Donnie put in a valiant effort and finished the race in 24th while Doug made a tactical error that let a gap form and cost him a chance at a win, but finished a respectable 20th place.

The Northumberland Classic is the hilliest race in the series. The course consists of a 16 km loop with 225 meters of elevation gains on a small strip of hard-packaged dirt road over the escarpment in Cobourg, Ontario. As the Morrison Hershfield team was warming up, a storm rolled in, and continued throughout the entirety of the race. The rain poured on the riders who struggled to make it over the muddy hills but pushed on. Eventually, the storm got so bad, the race officials had to call off the last lap due to lightening on the course. “In comparison to the cold on the first race, we didn’t mind,” said Jan. Both Andrew and Jan finished in the top 10 for this race with 8th and 6th positions respectively. Congratulations to both! 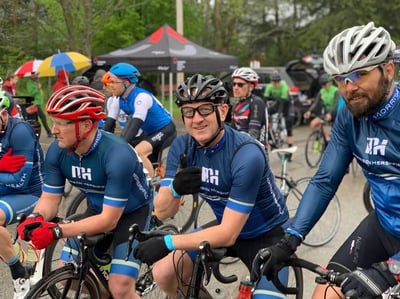 The final stop in the O-Cup series is the road race on June 2nd. The route consists of a 10.4 km circuit with a steep climb up Hawkesville Hill, which quickly descends once riders have conquered the climb. The remainder of the course is rolling hills and flats along the scenic Conostoga River. For this race, Morrison Hershfield had a rookie team member. It was Kyle’s first race ever and he did great, placing 18th in his category. At the beginning of the race, Andrew was leading the pack. He pulled ahead right away with another rider. However, out ahead of the pack on his own, he was exposed to all of the elements and had to exert a lot of energy early on in the race. Meanwhile, Jan and Doug patrolled the front of the race to try to block the rest of the pack from catching up to their teammate. Eventually, Andrew fell behind and out of the race. With the 2nd and 3rd place riders within sight, Jan had two choices; either sit in the pack and sprint for 4th to 12th place with the rest in the bunch, or attack and try to catch the three riders in front. He decided to attack, but unfortunately, no other riders went with him and ultimately he wasn’t able to catch the leaders and finished in 9th place.

A Season to Remember

It was an eventful season with many highs and lows. The race series uses a points system to track their leaders. At the end of the Morrison Hershfield team’s season, both Jan and Andrew placed in the top 10 overall.

Morrison Hershfield proudly supports a healthy work/life balance for our people. We are committed to maintaining a corporate culture that is fun, collaborative and supportive. The Morrison Hershfield cycling team exemplifies all of this and more. Congratulations to everyone who participated.