Morrison Hershfield was brought on to the project to provide Building Envelope Commissioning services by the building owner, City Creek Reserve, due to the complex nature of 111 South Main’s distinctive curtain wall assembly system. 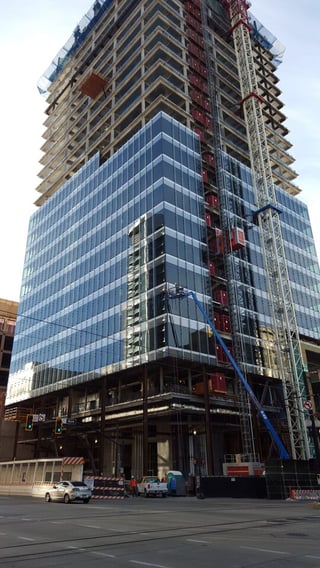 The ambitious curtain wall system design eliminated columns, allowing unobstructed views from the lobby of the building at street level, which has led to several high-profile awards, including:

2017, US Glass Magazine, Most Amazing Feat of Installation Lobby Glass

The building structure utilizes a unique hat truss system that eliminates columns at the ground level such that the building can overhang the adjacent Eccles Theatre building and provide unobstructed lobby views. This unique structure required atypical curtain wall design and installation, providing unique challenges for the project.

Rick Ziegler, Morrison Hershfield Building Science Engineer, said of the project “It’s always great working with an owner like City Creek Reserve who sees the big picture and recognizes the importance of the building envelope on building and energy performance.”

“The contractor, Okland Construction, contributed significantly to the execution through their dedication to quality and assistance with building envelope testing.”

“We were honored by the opportunity to work alongside these great partners to make an ambitious project a reality.”

Morrison Hershfield is excited to see Engineering News-Record's Global Best Projects 2017, Award of Merit in Office added to this list and is honored to have been selected by City Creek Reserve to provide engineering solutions on this iconic Salt Lake City project.