Electric-vehicle batteries and chargers, fire extinguishers, mattresses, single-use fuel canisters and solar panels are just some of the products being added to British Columbia’s Recycling Regulation.

Since 2004, BC has regulated residential packaging and paper, beverage containers, numerous electronics, light bulbs, tires, automotive oil, antifreeze and paint through EPR programs. The Recycling Regulation requires producers to take responsibility for the lifecycle of their products, including collection and recycling. This shifts the costs and responsibility for a product’s end-of-life impact from local / Indigenous governments and taxpayers to the producers and consumers of the products. The expansion of EPR programs is identified as being one of the most important and immediate actions BC must take to advance as a leader in EPR and waste prevention.

Morrison Hershfield assessed the economic and environmental impacts of EPR in BC on behalf of the Ministry of Environment and Climate Change (MOECC)BC and Metro Vancouver. The study, released in 2016, identified that B.C.’s EPR strategy recovers $46-million worth of materials annually and reduces greenhouse gas emissions by more than 200,000 tonnes of carbon dioxide equivalent per year. The EPR policy approach ensures convenient, provincewide collection services, increased participation in recycling programs, safe management and higher rates of recycling. When producers are responsible for recycling, including the costs, it promotes the design and use of more easily recyclable packaging and products. The new Five-Year Action Plan involves adding more product categories under EPR, reducing landfill disposal and helping to grow a circular economy where products are reused and recycled rather than wasted. 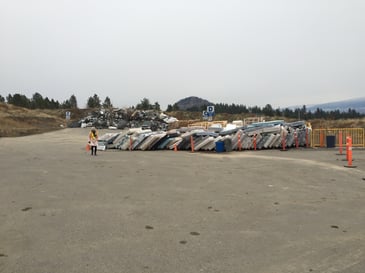 aimed to assess the economic and environmental impacts of mattress recycling within Vancouver and the potential impacts of a province-wide EPR program. At that time, it was determined that an EPR program for mattresses would help build recycling and processing capacity, reduce landfilling costs and create jobs in BC. The study estimated that regulating mattresses using a province-wide EPR approach would save an additional 100,000 cubic meters of landfill space every year. All of those mattresses laid end-to-end would stretch half the length of Vancouver Island from south to north.

Mattress recycling is now part of the new EPR strategy. With the establishment of a formalized EPR program for the mattresses, communities can expect a decrease in the amount of illegally dumped mattresses and a reduction in the associated clean up costs. The cost for collection and recycling of mattresses will now be incorporated into the price of the items, rather than being funded by municipal taxpayers.

Veronica Bartlett,  Solid Waste Planner for Morrison Hershfield commented, “I am so pleased to see that our study helped to support EPR policy development in BC. This EPR program for mattresses will create jobs, divert materials that are difficult to manage at disposal facilities, combat illegal dumping, reduce GHG emissions and save energy. It’s a win-win for us all!”.

With the new EPR plan in place, the policies and actions will help stimulate, support and enable recycling in BC and help Vancouver move towards their ultimate goal of zero waste by 2040.