Canstruction Houston: Doing what we CAN to stop hunger

Canstruction Houston’s 23rd annual design/build competition captured the attention of our Houston Office this year. Staff participated in this unique opportunity to showcase their creativity by building a unique “canstructure” using only canned food and other non-perishable food items.

The goal of this event, and others like it across the continent, is to draw attention to and end the suffering caused by hunger. It is a design/build competition showcasing the talents of Houston area architects, engineers, construction firms and students. All items are donated to the Houston Food Bank to benefit the less fortunate throughout the greater Houston area.

Eighteen corporate teams and seven local high schools participated in Houston’s 2019 event, held at the George R. Brown Convention Center. Teams were given just nine hours to defy expectations, logic and gravity as they built amazing “cansculptures” using thousands of cans of food as building blocks, tape and cardboard! The colors and designs on the food product labels formed the artists' pallet. 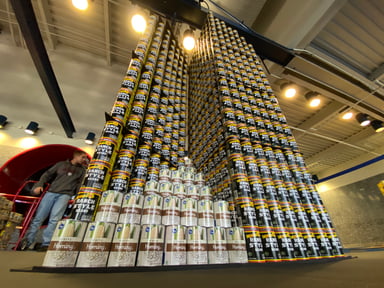 Morrison Hershfield’s entry used almost 3,000 cans to recreate Pennzoil Place, one of Houston’s first projects designed by Philip Johnson. It is an integral part of Houston’s identity. Our team felt that the building’s reflective symmetry and ambitious design along with its dramatic sloped shape is representative of our ambition to make a dramatic impact in the fight against hunger so that no child, person or family is left hungry. 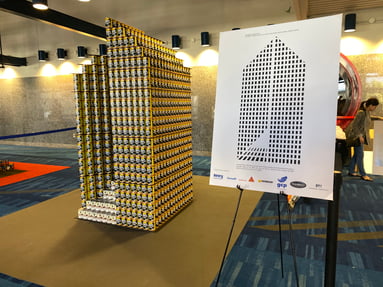 A member of Morrison Hershfield’s Canstruction team commented that “Not only was this was a great teambuilding initiative, it greatly benefitted the community. It was inspiring to see the students taking part, after all, they are our future community builders."

The exhibition of “cansculptures” was open to the public, with an appropriate entry fee of one can of food. All entries were judged in a variety of categories, and this year, the jurors’ corporate and high school favorites were “Candy Skull” by HOK-DPR Construction, Griesenbeck and “”Preparing Students for Tomorrow” by Alief High School with mentor Ziegler Cooper Architects.  “Whata Canstruction” by PhiloWilke Partnership and Vaughn Construction won the Public Favorite Award.

Congratulations to all participants who made a real difference in the lives of many Houston families, and thank you to all of the Canstruction sponsors, whose donations made this event possible. Together, almost 170,000 lbs of food was donated this year, and will provide more than 144,000 meals this holiday season.

Canstruction Inc. is a national charity sponsored by the design and construction industry with a goal of ending the anguish of hunger. Canstruction has contributed millions of pounds of food to community food banks – demonstrating that we can win the fight against hunger, one can at a time.  Canstruction Houston is a charitable organization whose mission is to produce a unique competition and food drive to benefit the less fortunate throughout the greater Houston area.