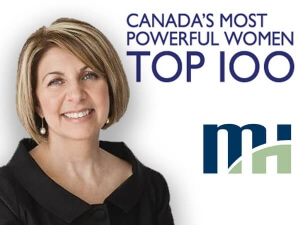 Morrison Hershfield is pleased to announce Catherine Karakatsanis, Chief Operating Officer, has been named to the 2015 Canada's Most Powerful Women: Top 100 Award Winner for the third consecutive year by the Women's Executive Network (WXN).

Launched in 2003, the Top 100 Awards celebrate the incredible accomplishments of Canada’s top female executive talent as well as their organizations and networks. They serve to recognize talented leaders in the private, public and not-for-profit sectors and to inspire the current and next generation to push the boundaries of what’s possible. The full list of WXN’s 2015 Canada's Most Powerful Women: Top 100 Award Winners can be viewed on WXN’s website.

Ms. Karakatsanis will also receive the Trailblazers and Trendsetters award for breaking new ground and barriers in her profession and for her contributions to society. She will be honored during a gala celebration at the Metro Toronto Convention Centre on November 26.

Throughout her progressive career at Morrison Hershfield, she has moved successfully through a series of engineering and senior management positions before becoming Chief Operating Officer. She is also a member of the firm’s Board of Directors.

Ms. Karakatsanis has consistently been recognized for her business and engineering contributions including:

“For these highly accomplished women, receiving a Top 100 Award means much more than recognition or a chance to share the spotlight with other remarkable winners, it’s an opportunity to pay it forward,” said WXN founder Pamela Jeffery. “WXN Top 100 Award Winners are powerful women both in their careers and their potential to transcend boundaries to have a greater impact on the communities around them.”

Congratulations Catherine on being celebrated as one of Canada’s leading businesswomen!