At the CDCXA ceremony, Morrison Hershfield was recognized with the Leader’s Circle 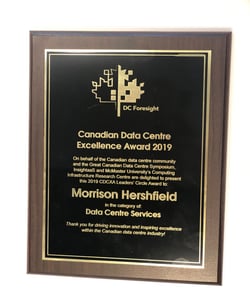 Award in the Data Centre Services category. This award goes to the data centre supplier who showed leadership in data centre design, engineering and professional services.

The winners were determined through intensive research, surveys, interviews and evaluations of vendors and end-users’ data centre projects and innovations. More than 140 managers and suppliers based in Canada, the US and other countries were surveyed and asked to weigh in on the impact of industry trends on their operations. The data centre industry professional community nominated and assessed leaders in three areas:

Results Based on Industry Research

The awards responded to the community’s requests for a fact-based, credible approach to identify, recognize and celebrate excellence in the Canadian data centre industry.

Morrison Hershfield would like to thank the data centre community for their input which identified us as the leading data centre engineers in Canada. Knowing the results were determined through proven results based on research and input from our clients and our peers makes this award even more valuable.