Cycling for MS in Texas

participated in the BP MS 150, a Bike MS event in Texas, in support of the National MS Society.

Morrison Hershfield’s team of seven, including five staff, cycled hours a day to cover a total of 170 miles in two days! The team began their journey in Houston, TX, stopped over in LaGrange at the end of Day 1, and carried on to the finish line in Austin, next to the State Capitol building, at the end of Day 2. As a team, they raised $5000 to make a difference in the lives of people affected by MS. 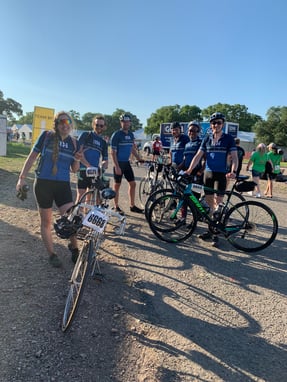 Although the event itself took place over just one weekend, preparation for the event began months earlier with organized team training rides, individual training and lessons on bicycle maintenance. Over 64 practice hours were logged by each team member before the actual event! Looks like all their preparation paid off, as the team worked well together throughout the ride to ensure that everyone had an unforgettable experience.

Congratulations on a successful ride for a great cause!

About Bike MS: Bike MS is the fundraising cycling series of the National MS Society and raises more money than any other cycling event for any other cause. BP MS150 is the largest event, with a variety of routes ranging from 140 to 170 miles.