The Queen Elizabeth Way (QEW) and Glendale Avenue DDI will be the first diverging diamond interchange (DDI) constructed in Ontario, and only the third in Canada. The new interchange will improve the flow of traffic and enhance safety in a highly commercial area with significant volumes of tourist traffic. 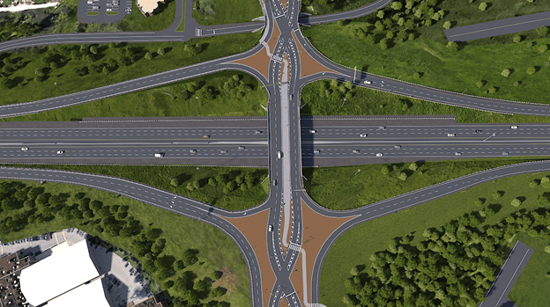 The DDI is a relatively new approach where traffic on the minor street (Glendale) diverges to the left-hand side of the road through two cross-over intersections. This enables left-turning traffic to access the major road (QEW) without having to wait for signals or cross oncoming traffic. This improves interchange functionality and significantly improves safety from a vehicle movement perspective by reducing the number of conflict points.

A diverging diamond design was selected over a traditional interchange for the QEW / Glendale Avenue interchange reconstruction because it provides: 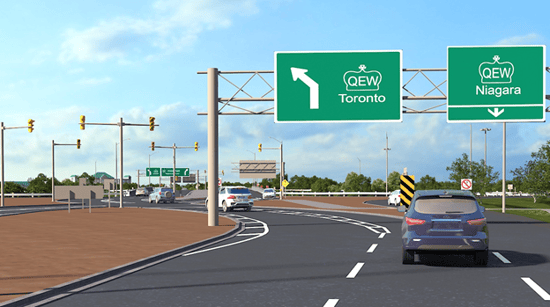 Although the concept is new to the region, moving through a DDI is quite simple and just as easy as any normal intersection. The unique design safely guides motorists through the interchange using two sets of traffic lights (one at each end) along with clear overhead signage and lane markings. To move from one side of the interchange to the other, drivers proceed through the first signal, cross over the length of the bridge on the left-hand side. Once on the other side of the bridge, they’ll reach another signal and cross back to the right-hand side. Left turns from the highway off ramp are easily made without having to cross oncoming traffic, increasing capacity and flow while reducing the conflict point.

Pedestrians and cyclists converge at the signalized intersections and pass through the interchange between the traffic lanes on a multiuse path that runs down the centre of the interchange. They are separated and protected from the traffic by concrete barriers. 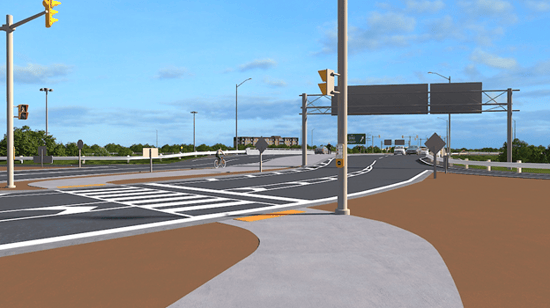 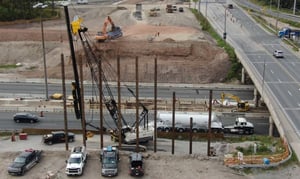 Construction is divided into five stages. The project is currently heading into construction phase 3, including construction of the superstructure of the QEW / Glendale Avenue diverging diamond interchange underpass structure and construction of Airport Road connection and loop ramp. Completion is anticipated for 2023.