An exciting transformation has taken place at Bank Street and Riverside Drive in Ottawa. The multi-use pathway below Billings Bridge makes it safer and easier for bikes, pedestrians and motorized vehicles to move through one of the busiest intersections in the Nation’s Capital. 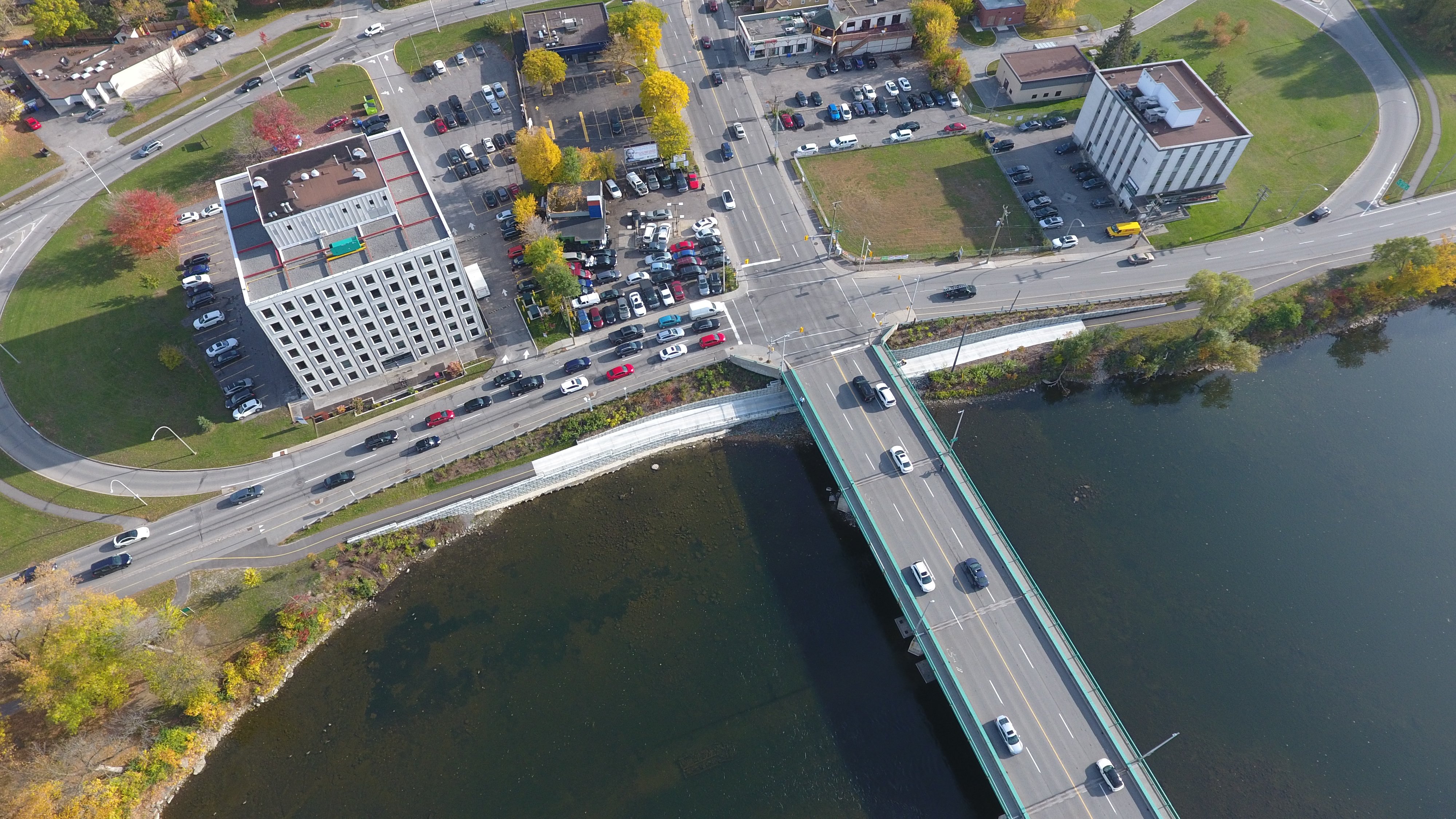 Building a multi-use pathway is relatively straight forward, under normal circumstances. But throw in a host of challenges like land constraints, environmental sensitivities, restrictive scheduling and meeting the approvals of multiple regulators, and the level of complexity increases significantly.

The Nation’s Capital is home to some of the most forward-thinking and extensive cycling infrastructure in the province, with a growing network of bridges, pathways and cycling tracks. There are over 600 km of multi-use pathways linking natural areas, parks and attractions and providing an option to those choosing alternative methods of transportation for their daily commutes. Billings Bridge has long been a problem area for cyclists and pedestrians. Users of the Rideau River Eastern Pathway, the multi-use path along Riverside Drive, had to cross Bank Street at a very busy intersection at the south end of Billings Bridge. The large volume of traffic crossing the bridge, including a large number of vehicles turning onto Riverside Drive, made for a very dangerous situation with a high potential for conflicts, earning this location a reputation as one of the worst intersections in the city for pedestrians and cyclists.

The Need for a Safer Option in the Community

In 2013, the unthinkable happened. A cyclist was struck and killed by a truck at this location while cycling home. In response to the increasing community concerns for pedestrian and cyclist safety, the National Capital Commission (NCC) identified this and two other sites as priority locations to modify existing facilities and make improvements for active transportation users. When funding became available through the Public Transit Infrastructure Fund, the NCC and the City of Ottawa joined forces with Morrison Hershfield to improve safety for vulnerable users of the Rideau River Eastern Pathway at Billings Bridge.

Design began in 2017, when Morrison Hershfield provided engineering design and

tendering services for the new grade separated pathway, along with construction administration, inspection and engineering support services during construction. The firm worked closely with clients, multiple stakeholders and the public to develop a design that maximizes pedestrian and cyclist safety and minimizes vehicular disruption at this high volume intersection. Numerous design iterations were developed and presented to the NCC during the preliminary and detailed design phases, and all presented a grade separated pathway since the existing intersection configuration did not allow the opportunity to upgrade the at-grade crossing itself. The preferred solution was a grade-separated multi-use pathway below Bank Street, adjacent to the abutment along the eastern shore of the Rideau River.

Detail design for the enhanced pathway began in May 2017. Over the course of the project, extensive coordination was required due to the sensitive project location. A large number of federal and provincial permitting agencies were involved, including Department of Fisheries and Oceans Canada, Environment Canada and Climate Change, Ministry of Natural Resources and Forestry, Rideau Valley Conservation Authority and Transport Canada. All permits were in place before official construction began in September 2018. There were also numerous local interest groups whose concerns were taken into account throughout the study.

Due to the three metre grade elevation separation between the Rideau River and Riverside Drive, Redi- Rock concrete blocks were used to construct the retaining walls on site. These blocks are relatively easy to install (rapid placement) and limit the encroachment of the embankment into the Rideau River. A limestone texture facing was chosen to maintain as close to natural stone look as possible. The walls are designed to withstand flooding as well as heavy yearly winter ice flows.

A pedestrian handrail runs along the full length of the retaining wall located immediately adjacent the Rideau River. It was designed to provide added safety and maintain the scenic views of the River without being visually obtrusive.

The landscape design, consisting of numerous trees and small shrubs, ties into the natural surroundings, and blends with the natural beauty of the Rideau River corridor. Native plant species were used. Wetland restoration was necessary to repair the impact of constructing the retaining wall and pathway. Landscaping and restoration were carried out by the Contractor per the detailed plans provided by Morrison Hershfield. 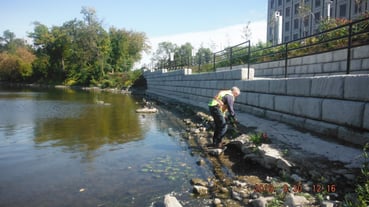 The project was situated on both federal and provincially owned land. This meant obtaining all necessary permits for Federal Land Use as well as meeting provincial requirements. To obtain all the necessary permits and permissions from environmental agencies, Morrison Hershfield successfully demonstrated that construction would have little to no impact on the Rideau River, including Species at Risk (birds, fish or turtles), water levels of the river and marine traffic, and that proper mitigation measures would be put in place during construction to prevent any potential impacts. Careful coordination with the Contractor and the City was essential for the timely resolution of unexpected site issues during construction and to minimize impacts to the overall schedule.

It's been one year since the completion of the grade separated multi-use pathway portion of the Eastern Rideau River Pathway at Billings Bridge. It has vastly improved safety for cyclists and pedestrians travelling east and west bound along the river. They can now completely avoid the busy intersection of Bank Street and Riverside Drive. The project also enhanced the natural beauty of the surrounding area, using a variety of landscape plantings and a custom retaining wall face texture.

This new pathway, though small in scale, has made an enormous difference in the lives of people using the city’s pathway network. The enhanced safety of the network has made it more attractive for users to choose alternative transportation methods which will ultimately reduce the number of motorized vehicles on the road, reducing greenhouse gas emissions and Ottawa’s overall carbon footprint. A safe and integrated active transportation network also promotes a healthy lifestyle by encouraging more people to use the network for recreation and exercise.

Capital Ward Councillor Shawn Menard summed up the importance of this new grade-separated link, stating: “This new MUP (multi-use pathway) is an important step in bringing some much-needed safety to the intersection of Bank and Riverside. The new underpass will be a welcome addition to the network of paths throughout the city. These paths help connect residents and communities, giving people added mobility while letting them enjoy some of the city’s beautiful greenspace.”

Green cities depend on sustainable transportation, but the networks must be safe, secure and inviting to users. Establishing a safe and sustainable multi-use pathway network helps to establish the Nation’s Capital as a world class cycling city.