March 8th is International Women's Day. It celebrates women's achievements and recognizes progress towards a more gender-equal world. The theme this year is "Each for Equal" which is all about collective individualism and understanding that while everyone is different, collectively we can come together to take action for equality.  This is something that Morrison Hershfield believes deeply as we continue to make efforts towards a more gender-balanced environment both in our offices and in the industries which we participate.

Just one example of our efforts to drive change includes a recent Atlanta event initiated by Morrison Hershfield to improve gender diversity in the data center industry.  The event, co-hosted by Morrison Hershfield, Corgan, Holder and LayerZero in February, was attended by a large group of data center professionals interested in learning more about improving gender diversity.

A keynote on Gender Intelligence 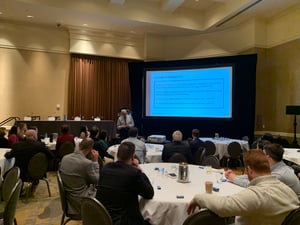 Did you know that the physiology of male and female brains is different? This is why both genders process information differently.

The keynote was presented by writer, facilitator and frequent speaker on Gender Differences, John Fayad. It focused on the science behind this important topic and what can be done to leverage gender differences to help organizations in the data center industry succeed, while simultaneously working towards the goal of increasing gender equality.

Much like the theme of International Women's Day, this keynote was based upon the understanding that we are equal, but not the same.

“Gender diversity driven by compliance and quotas, isn’t working and never will. By understanding the differences and complimentary nature of men and women, organizations can move from a culture of compliance to one of commitment. They can intentionally and genuinely seek out and engage those differences.” This awareness is what defines gender intelligence and what John Fayad has based his career as a business consultant.  Together with the company, Gender Intelligence Group, he has facilitated countless workshops and conducted leadership assessments and executive coaching sessions to help organizations create a better balance and a more inclusive culture.

In addition to the providing information about differences between the two sexes, John also references how integrating the strengths of both genders in leadership, helps enable favorable work environments, ethical values, motivation, accountability and innovation. Articles that cover key concepts about the ways that men and women bring value to organization and how to leverage their differences to gain a competitive advantage, can be found on the Gender Intelligence Group's website here.

The panel of industry leaders. 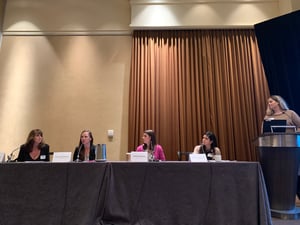 The panel was moderated by Jacqui Forbes from Morrison Hershfield. She asked the panel, "What has been the most significant challenge of your career?"

The panel agreed that it was difficult to have the confidence it takes to get noticed in an industry that is primarily men. “Confidence is a huge deal in performance,” said Callie Gregory. She went on to explain how she credits part of her success to having a great sponsor who had faith in her and guided her throughout her career. John’s presentation reinforced Callie’s point as he agrees that having men not only mentor but sponsor the success of women is instrumental in enhancing gender diversity in the workplace. "It's important to have people who believe in us and our strengths, especially people who know we deserve a seat at the table." added Callie.

The panel explored other issues. Participants explained how it feels to be the only woman in a room full of men, as is typical in the data center industry.

The panel was also asked, "What changes have you seen in the industry since you started?" Alejandra Rodriguez explained that since she started, her architecture firm has grown to have a 50/50 split between both men and women in their organization although she recognized that did not yet pertain to those working in the data center sector. “Data centers have all the intricacies that I'm really passionate about. It's exciting to know there is a place for women in the industry,” she said.  Heather Bacci explained how she never imagined being a leader in the industry when she was in the earlier stages of her career as a single mother. "It is difficult to find a balance between career and motherhood," she said and went on to explain how she felt she had to work even harder and longer hours than her male counterparts to prove that it wasn't something that would affect her ability to be good at her job.

Another issue examined by the panel was on the subject of what men and women can both do to improve the experience of working together on jobs. “Treating men and women the exact same isn't enhancing our ability to work on a team level. Each of us as individuals is unique. If you bring out the best in everybody, and allow each to show their strengths, it will give you the ability to have the best team," said Callie.

While there is still a long way to go, events like this start a dialogue that helps work towards a more inclusive culture within the data center industry. Today, and every day we are #eachforequal.