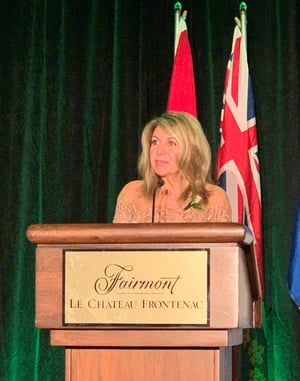 TORONTO, CANADA (May 24, 2019) – Catherine Karakatsanis, P.Eng., received the 2019 Engineers Canada Gold Medal, this country’s top honor among the 295,000 Professional Engineers in Canada, at a ceremony in Québec City.  Each year, the Gold Medal may be awarded to a Professional Engineer for “exceptional individual achievement and distinction in a field of engineering”. This includes industry accomplishments, service to the engineering profession and contribution to the community, and sets the bar high for those who follow in their footsteps.

Morrison Hershfield is especially honored by this recognition, as Catherine is the second leader from the firm to receive this prestigious award, following the late Art Johns who was presented with the Engineers Canada Gold Medal in 2004.  This is the first time that two leaders of the same firm have received this honor.

Catherine is Chief Operating Officer and a Board Director of Morrison Hershfield Group Inc., an employee-owned engineering practice with 23 offices in Canada, the U.S. and India.  Catherine is an exemplary contributor to the industry and the community, and has been breaking new ground in the engineering profession throughout her career.  Catherine’s engineering work led to her achieving many ‘firsts’ becoming the first female Shareholder, Board Director, Board Secretary and Executive in Morrison Hershfield’s 73 year history.

As a champion of women’s issues, Catherine has worked diligently to address the gender imbalance in the profession.  She has encouraged policies at Morrison Hershfield and in the engineering industry that have improved the working conditions and opportunities for female professionals.

Catherine is also a dedicated volunteer leader engaging engineering students and young professionals so that they are better equipped to face the engineering challenges of the future.  She has led the national organization (Engineers Canada), provincial regulator (Professional Engineers Ontario) and provincial advocacy body (Ontario Society of Professional Engineers).  She remains involved with her alma mater and sits on Western University’s Board of Governors.

“I can truly say, unequivocally and without reservation, that Catherine represents the highest ideals of the engineering profession and humanity in general. She is impeccably professional, intelligent, ethical, honourable, empathetic, compassionate, charming and wise, and yet also very humble. There simply aren’t enough positive adjectives in the English language to fully describe her.” ~ Chris D. Roney, P.Eng. Roney Engineering and past president of Engineers Canada.

Congratulations Catherine on receiving the 2019 Engineers Canada Gold Medal Award, and thank you for your outstanding service to our firm, the engineering profession and society!