“Fiendishly simple, yet brutally hard. Everesting is the most difficult climbing challenge in the world.” – www.everesting.cc 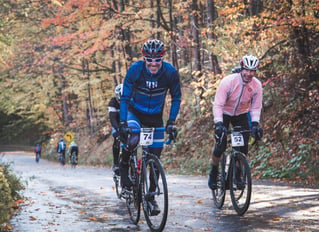 The concept of Everesting is this: pick any hill, anywhere in the world, and complete repeats of it in a single activity (like walking, running or cycling) until you climb 8,848 meters, the equivalent height of Mount Everest!

Sound crazy? Well, this year 52 cyclists took part in the New Hope Community Bikes Everesting Challenge in Hamilton, Ontario. Participants in the event have the option of riding solo or reaching the elevation goal as part of a team. Morrison Hershfield entered an ambitious team of six riders, who each completed 14 consecutive laps up the Niagara Escarpment. Each lap represents about 100 meters of vertical elevation… and the ride downhill doesn’t count!

The Morrison Hershfield team began their climb at about 9 a.m., after making a group decision to wait out the early morning rain. They finished their combined climb in just under two hours! Collectively, all participants made more than 1,600 trips up and down Fifty Road, for a total of 160,000 meters in elevation. To put this in perspective, that’s high enough to reach low Earth orbit!

The event was very well run, and everyone had a great time. One member of the Morrison Hershfield team participated because, “I want to support a local organization that will help make cycling more accessible to those that are disadvantaged, and helps get more kids on bikes, safely, through their school outreach program.”

New Hope Community Bikes’ vision is to build community through bicycles. A registered charity in Hamilton, ON, it is a learning hub for building and repairing bikes, offering safe cycling education, providing access to affordable transportation, and fostering a rich and inclusive cycling community. NHCB believes bicycles can help build healthier, more environmentally friendly communities. Monies raised through the Everesting Challenge will let the charity continue to provide accessible and affordable transportation for those most in need, sustain its bike program in Pikangikum First Nation, deliver cycle education programs in area schools, and inaugurate a youth cycling and mental health program in Hamilton.