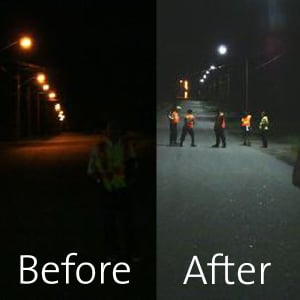 The Corporation of the City of North Bay is the single owner of over 5,600 existing high-pressure sodium street lights – maintained locally by North Bay Hydro. The city pays North Bay Hydro a set monthly fee that is pre-determined based on the drawn wattage, operating schedule, and the Ontario Energy Board’s approved rates under the “Street Light Class.” North Bay retained Morrison Hershfield to conduct quantitative and qualitative testing of different lighting technologies and fixtures from various suppliers to determine the adequacy of the light in terms of intensity, distribution and light output. The study included the evaluation of the photometrics of the supplied fixtures to ensure RP8 standards could be met for residential, collector and arterial roadways and representative roadway intersections.

This exercise thoroughly analyzed, tested and reviewed the costs and benefits of emerging street light technologies. The objectives of City’s study were clear – explore luminaires that would be more energy efficient, produce a better quality of light and have a lower carbon footprint due to its longer life. The replacement fixtures would also have lower maintenance costs, lower recycling cost, reduce night light pollution and cause less damage to the environment all while meeting electrical safety authority (ESA) requirements.

Bench tests of each light fixture were conducted to measure actual energy consumption. The data of each light type was compared to the existing standards, the manufacturer’s specifications and the city’s key requirements to confirm the economics and suitability of each luminaire.

Financial modeling was completed based on information from the suppliers and data collected during the analysis. The light intensity and distribution of the fixtures of the optimum bid was confirmed through field pilot tests conducted co-operatively by the local distribution company and Morrison Hershfield to confirm the photometrics submitted by the supplier prior to final award of the contract.

The engineering study and field testing concluded that LEDs offered the optimum solution for the City considering the established infrastructure system of pole spacing, fixture heights, and roadway design and the LEDs met RP-8-00 requirements.

LED technology yields a tremendous savings for the City

A final report was presented to the City of North Bay, including the light level measurements. The project to replace the more than 5,600 street lights with energy efficient fixtures has now been completed. The City of North Bay became the first municipality in Ontario to be converted to LED street lighting.

The $2.8 million capital investment has a 10-year payback and qualifies for Ontario Power Authority incentives. Through its efforts to reduce its carbon footprint through energy conservation, the City of North Bay has demonstrated that the use of LED technology is an efficient and sustainable street light solution for municipalities that can also provide long-term economic benefits.