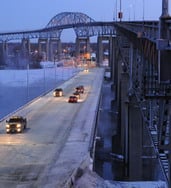 Overhanging the St-Lawrence Seaway, the Seaway International Bridge in Cornwall is a vital road link between Canada and the United States. Every year, the bridge accomodates over 120,000 commercial transits and more than 2,300,000 passenger vehicle transits.

The bridge crossing connects mainland Canada at the City of Cornwall to Cornwall Island and to the U.S. State of New York near the City of Massena. The owner of the Crossing, the Federal Bridge Corporation Limited, decided to remove the existing high level North Channel Crossing structure, which requires excessive maintenance efforts due to factors such as age, condition and usage, and replace it with a lower level structure.

In a quote from a recent press release, FBCL President and Chief Executive Officer Mrs. Micheline Dubé stated that "The new bridge incorporates advanced technology in its design and construction. It is a tremendous project for the FBCL team to provide Cornwall, Akwesasne and surrounding communities a sustainable and effective Canada - United States link.”

Further details can be found on the project website.