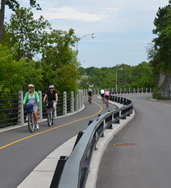 The Ontario Professional Planners Institute (OPPI) has presented the City of Ottawa with an award for Excellence in Planning for its recent Transportation Master Plan (TMP) update.The awards – which recognize innovation, creativity, professionalism, problem-solving, and communications – were announced on November 7, 2014 in a press conference at Queen’s Park.

Morrison Hershfield, in partnership with IBI Group and Noxon Associates, were actively involved with the development of this TMP update, which was unanimously approved by City of Ottawa Council in November 2013.

Bassam Hamwi, Director of Transportation Planning at Morrison Hershfield, noted that the award is very meaningful because of the innovation and forward thinking involved in the TMP development, and the importance of the plan in supporting the City’s initiative of “Building a Liveable Ottawa”.

“There is no feeling that matches that of being part of a project that will influence the development of our great City for years to come... The timing of this award on the heels of the City receiving a Gold Award in 2013 from the Canadian Council for Public-Private Partnerships (CCPPP) for Transportation Innovation on Ottawa’s Confederation Line is particularly rewarding.” Morrison Hershfield is part of the Canadian Transit Partners consortium, which undertook the Preliminary Design for the Confederation Line, and played a supporting role in the Procurement Process for the $2.1B Confederation Line.

For more information on OPPI's Excellence in Planning Awards and this year's winners, please visit ontarioplanners.ca.