Morrison Hershfield’s field staff worked hard this summer; collecting data and assessing approximately 30,000 private properties and about 1,000 municipal infrastructure assets as part of the City of Toronto’s Basement Flooding Protection Program. This important project identifies at-risk areas through assessments and modelling and implements infrastructure improvements that will mitigate the chance of flooding and protect community residents from water damage that can cost billions in insured losses from sewer backup claims.

Flooding in the City of Toronto

Over the last two decades, the City of Toronto has experienced several large storm events that caused flooding in many homes, erosion in ravines and watercourses, and damage to the City’s infrastructure, such as roads, bridges, culverts and sewers. In response, the City implemented an ongoing infrastructure project, intended to prevent surface flooding of private properties and reduce the amount of stormwater entering the storm, sanitary and combined sewers. This initiative is now known as the Basement Flooding Protection Program.

The multi-year program which initially started in 2006, is helping to reduce the risk of flooding for the residents of Toronto by making improvements to the sewer system and overland drainage routes. In order to determine improvements, Class Environmental Assessment studies are conducted for 67 study areas across the whole city.

Morrison Hershfield is the prime consultant and project manager, completing the studies, recommendations and design for three study areas in the Scarborough region of the Greater Toronto Area.

The project involves several stages, including:

The field work study phase of this project is almost finished. A systematic approach was used to carry out the large volume of field work required.

The assessments characterize observations in the roof downspouts and lot grading for residential and commercial buildings and catch-basins and manholes along the City’s public right-of-way. The drainage systems and flood cluster areas are identified so that flow monitoring programs can be customized. Nine teams with two field workers per team were responsible for assessing approximately 30,000 properties over the course of the spring and early summer.

Together with sub-consultant Associated Engineering, urban system modelling is then completed for the study areas. System modelling of the storm and sanitary sewers allow identification of properties at risk of overland flooding as well as sewer backup.

For example, the figure below shows how water flows on the surface, either along the streets or on private property. The purple lines are the flow routes and the red patches represent areas of pooling. When pooling occurs between lots, it represents a larger flooding risk than when pooled on streets. 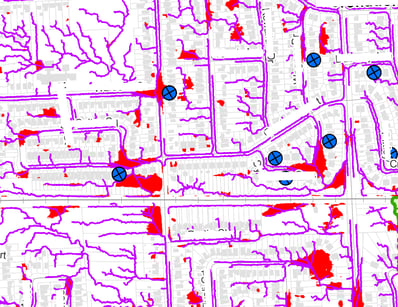 In the images above show a typical dual manhole inspection:

The reports from the studies will summarize the data collected, identify data gaps, develop the field investigation and flow monitoring program and assess causes of basement flooding based on the collected data. Upon completion of the study component, a provisional preliminary design component will be undertaken as the next phase of the study.

To date, the Toronto Basement Flooding Protection Program has been very successful. The City has been able to make good on its commitment to the community to deliver significant infrastructure upgrades to combat climate change.

With the results from the studies and the recommendations made by Morrison Hershfield, infrastructure improvements will be made to reduce the risk of future flooding in Toronto, prevent damage to municipal and private property and save money on repairs and insurance claims.