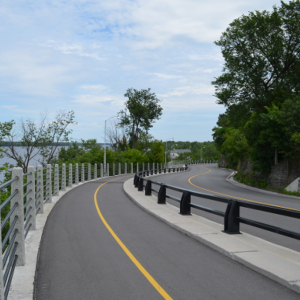 The project included the construction of a new illuminated multi-use elevated pathway overhanging an escarpment cliff along the Ottawa River, the rehabilitation of existing retaining walls, the construction of new retaining walls, roadway rehabilitation using expanded asphalt recycling process and surface asphalt and widening in locations for pedestrian refuge islands at various crossings.

The Morrison Hershfield team developed efficient, economical and sustainable solutions that met all of the Owner’s requirements.

Here are 7 project challenges the team faced and overcame:

The completed project is now one of the jewels of the national capital region as it provides scenic views of the surrounding area and compliments the landscape when viewed from the river and from Quebec. The finishes on all of the steel and concrete surfaces were selected to enhance the aesthetics of the facility for both users and those looking at it from afar.

The construction of the new pathway forms a missing link in the Capital Pathway system which now allows continuous access between the points west and downtown to points along the river. The project was recognized as one of the top two projects in the region for cyclists in 2014.