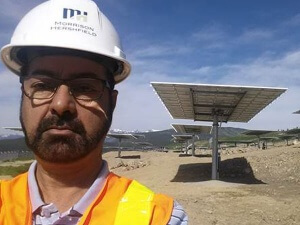 Western Canada’s largest and the province’s first grid-connected solar project was completed with the help of the Morrison Hershfield team.

The new SunMine, established in Kimberley, BC on the site of a former mine, was reclaimed by a Vancouver-based non-profit, EcoSmart Foundation, who started the process of transforming the location into a unique, one-of-a-kind solar farm that will power approximately 200 homes. Morrison Hershfield, led by Technical Manager Manny Mudhar, provided technical input including AC and DC electrical engineering design, structural engineering and field services for the new 1.05 MW solar project.

Over 4,000 Photo-voltaic (PV) modules are mounted on 96 trackers to capture Kimberley’s 300 days of annual sunshine – providing 38% more energy than a fixed system – to generate about two gigawatt hours of energy annually. The trackers capitalize on the electricity generated during the morning and evening, peak demand times when BC Hydro has the greatest need for electricity.

“The SunMine has brought great attention to the innovative and entrepreneurial spirit of the City of Kimberley," said Scott Sommerville, Chief Administrative Officer for the City of Kimberley. "It also demonstrates our communities commitment to the environment and renewable energy, and even publicizes the 300 plus days of sunshine per year that we receive. Energy production and revenues have surpassed our expectations in the first few months of operation.”

There are a number of milestones that make this project extraordinarily unique and groundbreaking, including:

Since the fall of 2010, Morrison Hershfield has completed over 60 solar PV projects. For more information on our services, click here.

For more information about this project, visit the SunMine site.