In recognition of International Women in Engineering Day, we want to highlight the importance of the 30 by 30 initiative. Increasing the percentage of newly licensed female engineers to 30 percent by 2030 will require consistent and constant attention to the issues that have caused the gender imbalance in the engineering profession.

Today Morrison Hershfield is announcing the launch of a series that highlights a number of those issues and identifies strategies that female role models have used to achieve their personal and professional goals.

The first story in our series deals with peer mentoring and the positive steps that the professional women in Yukon are taking to support each other.

Engineers Yukon’s 30 by 30 Committee recently hosted an intimate luncheon for local female engineers, organized by Morrison Hershfield’s Katy Bosma, EIT. The session was inspiring and representative of other initiatives by the Committee to provide resources and support for the small community of female engineers in Whitehorse and the north.  The discussion was open and casual, but important. It offered the opportunity for a group of like-minded women to come together to share ideas, experiences and talk about the issues they believe are important, particularly as they relate to women in engineering. Forums like this can be a lifeline, and they are much needed in communities like Whitehorse where the pool of female engineers is limited.

Participants at this session included eight female engineers (and two very cute babies!) Two of the women own independent consulting practices, one works at a research center, three work for the government and two work for a large, multidisciplinary engineering consulting firm. They are all at different stages in their careers, with varying backgrounds and experience, but what they all have in common is this: they are women, finding their way in a male dominated profession, and they want to support and encourage each other.

In organizing the event, Katy reached out to one of her mentors, Morrison Hershfield’s Chief Operating Officer Catherine Karakatsanis, who was thrilled to take part in the session. Although she is situated in a relatively small office in Whitehorse, Katy considers herself fortunate to be part of a large company with a number of strong female leaders and role models.  She is quick to point out that there are many women who do not have a support network available to them in their workplaces.

“Engineers Yukon’s membership is quite small. Although we have many consultants working up here, many are based down south, and we have a very limited pool of women in our profession, especially as role models and mentors.  Because of that, I could NOT pass up the opportunity for all my fellow female engineers to meet Catherine, who is one of the best role models out there!” – Katy Bosma, Morrison Hershfield, Whitehorse

Catherine is the recent recipient of the Engineers Canada Gold Medal. She is a leader, role model and mentor to colleagues and young people, especially women, who choose engineering as a profession. She has long been a champion of women's issues, encouraging policies that have improved the working conditions and opportunities for female professionals at Morrison Hershfield and in the engineering industry.

At the Whitehorse session, Catherine embraced the chance to talk about the strategies she has used throughout her career to help her push the boundaries, break down barriers, seize opportunities and find success. She shared her thoughts on what workplaces can do to support the attraction and retention of female professionals, challenges and opportunities for women pursuing leadership roles, the benefits of gender intelligence training, finding work-life balance and how women can advocate for themselves and each other.  Most importantly, she encouraged others to share their stories and experiences – because everyone’s story is important.

Support systems like this are essential for women. That is not to say that male mentors are not important – because they are an essential part of the mix. But building connections with their peers gives these female professionals a sense of belonging, as well as motivation and confidence in their capabilities as engineers.  Ultimately, having this support will help to retain more women in engineering, strengthening the profession and allowing us to better serve the public. 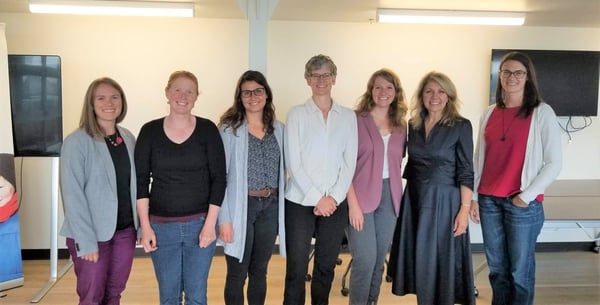 “Engineering is essential in securing Canada’s health, safety and economic prosperity. To do that well, we must include the greatest possible range of knowledge, skills, experience and perspectives in the profession. That means ensuring more women are joining, staying in and taking on leadership roles in the profession.”  - Catherine Karakatsanis, P.Eng, COO, Morrison Hershfield.

Congratulations Engineers Yukon for taking an active role in providing opportunities for women to find the support they need and to offer their support and mentorship to others.  Together we can accomplish “30 by 30”!

The 30 by 30 goal is Engineers Canada’s commitment to raising the percentage of newly licensed engineers that are women to 30 per cent by the year 2030. The 30 per cent figure is widely accepted as the threshold for self-sustaining change. The initiative has received unanimous endorsement across Canada.

About the Engineers Yukon 30 by 30 Committee

The Engineers Yukon 30 by 30 Committee was formed about three years ago to work towards achieving the 30 by 30 objective set by Engineers Canada. The group plays an important role in the region, aiming to attract and retain more women in the profession through the development of best practices and by simply providing support that may not be available in their respective workplaces. It has hosted networking events, retreats and social events and it has collaborated with other committees to facilitate professional development opportunities for the membership that focus on gender equality in the profession.