The New and Improved Empress Street: Manitoba's Worst Road Gets a Makeover

A ceremony held this morning celebrated the recently completed Empress Street project. This comes after a two-year initiative that involved reconstructing and rehabilitating the existing street to improve transportation for the area around the old Winnipeg Stadium.

Ride along with Morrison Hershfield as we cycle the newly implemented bike lanes and explain some of the changes, new features and community benefits of this project.

Empress Street was voted the worst road in Manitoba in 2018 and 2019 in a poll conducted by CAA. This unfortunate designation was due to major 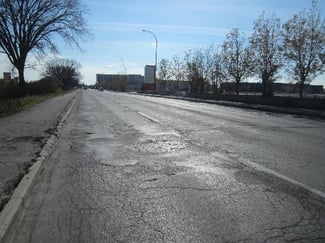 deterioration and change in use which resulted in crumbling pavement, potholes, congestion and inadequate infrastructure for cyclists and pedestrians. Originally, Empress Street was built to facilitate heavy event traffic that was leaving the Winnipeg Arena and Winnipeg Stadium. The two venues were relocated and the buildings razed. The area was redeveloped primarily for commercial retail usage and the needs of the surrounding roadways had drastically changed. The need for a reconstruction and rehabilitation project was imminent.

Transportation Solutions That Make a Difference

The City of Winnipeg and Morrison Hershfield, along with sub-consultants TREK, Scatliff+Miller+Murray and Urban Systems dedicated the last 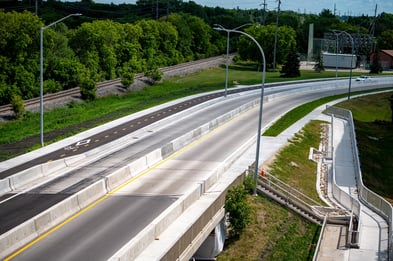 couple of years to improve the look and feel of this corridor. The road geometry, as well as function, was modified to convert a section of Empress Street East to one-way northbound traffic. This allowed for the addition of an active transportation facility to parallel Omands Creek, a desirable route for cyclists and pedestrians. Other road features include the addition of medians, turning lanes and cyclist/pedestrian crossings to improve the safety of the street. The project also included the rehabilitation of the Empress Street Overpass, and construction of accessibility ramps onto Empress Street from both the north and south sides of Portage Avenue.

A new active transportation corridor for cyclists and pedestrians was added as one of the prominent features of the project. To implement this, Morrison Hershfield took the needs of the community into consideration. For example, dirt trails imprinted on the grass beside the roadways showed the desired routes that cyclists and pedestrians had created without the supporting infrastructure. With this in mind, Morrison Hershfield designed the infrastructure that would support the needs of its users.

The enhanced active transportation corridors provide a safe and more sustainable transportation option for the community and includes a separated, bi-directional protected bike lane along with a sidewalk. The corridor better connects the surrounding communities to the desirable Polo Park Shopping Area. The bike lane features its own traffic signals, depressed sections to provide a smoother surface and defined separation between cyclists and pedestrians. In order to create this facility along Omand’s Creek, the banks were stabilized and a short retaining wall was implemented. The road was also narrowed to allow for the infrastructure to be built adjacent to the creek. 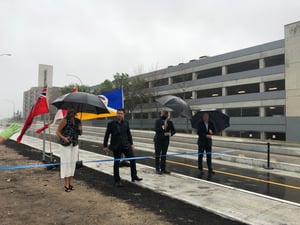 At the opening ceremony, Councillor Matt Allard commented on the new active transportation corridor saying, "Infrastructure investments like these are so essential to encouraging mode shift and the Winnipeg Climate Action Plan has an ambitious goal of mode shift of 50% by 2030. This is exactly the type of project that's going to get us there."

“Driving on Empress Street today, you can hardly recall what used to be there,” said Gwen Coolidge, Morrison Hershfield Transportation Engineer. The road slopes are now reshaped and the geometry along Empress was improved to make it a smooth and comfortable drive. The active transportation facility connects from the Assiniboine Path System to St. Matthews Ave. Bike Lanes to fully integrate it into the city’s cycling network and the bridge rehabilitation and pedestrian ramps provide easier accessibility for cars and decreased congestion in the area. Needless to say, this street won’t be making the worst roads list anymore.