Digital Realty’s TOR1 Data Center in Toronto, Ontario was one of three data centers from around the world shortlisted for the Multi-Tenant Data Center Award at the DCD Global Awards program. The annual award ceremony recognizes efforts and innovations of people and projects in the data center industry.

The DCD Award for a Multi-Tenant Data Center recognizes innovation in greenfield and brownfield data center design within this fast-paced sector. Finalists in this category were:

TOR1: From Printing Press to Largest Data Center in Canada 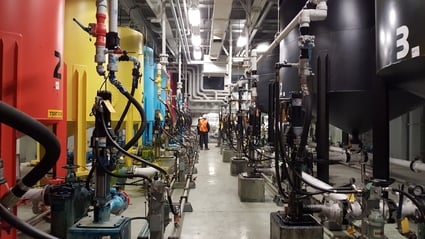 Digital Realty’s TOR1 project demonstrates that with the right team of experts, existing facilities can be repurposed to achieve industry leading standards and meet a client’s goals and vision for cost-effectiveness, speed to market, energy efficiency, flexibility, reliability, and power. Other local data centers have limited ability to offer their customers the same, and none can do so on the scale of TOR1.

Previously home to the Toronto Star's printing press, Digital Realty’s TOR1, was transformed into the largest data center in Canada. TOR1 helps enterprises address their needs for more distributed data hosting, connectivity, and exascale computing within a single campus along with the flexibility to scale capacity and network bandwidth requirements.

In a facility once rolling tens of thousands of newspapers off its presses, this center now spans 711,000 square feet, with capacity to support a total IT load of up to 54 MW. Digital Realty’s thoughtful approach to the redevelopment of the Toronto Star building put a host of innovative and sustainable features at its forefront. 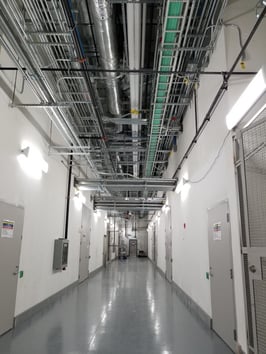 Speed-to-market was of utmost importance when planning and designing a multi-tenant project of this magnitude. The aggressive schedule was driven by two factors.

First, the need to support Digital Realty’s customers’ growth into the Toronto market and anticipate their future capacity needs.

Second, to maintain financial viability when retrofitting an existing building with extreme constraints to data center designs. This meant the design must allow for flexibility in density requirements, focusing on achieving industry-leading standards while meeting basic objectives for cost-effectiveness, speed-to-market, sustainability and reliability.

TOR1 was planned in two phases for a total of 54 MW of capacity. Phase 1 features 12 computer rooms ranging in size from 8,600 to 13,000 square feet. They share 4MW of power infrastructure, can accommodate power capacities between 1.0 and 3.0 MW each and have N to 2N redundancy capability at room or infrastructure level, with a power density range of approximately 100 to more than 300 watts per square foot.

Phase 2 features 5 computer rooms of varying capacity, ranging from 4.0 to 8.0 MW and between 180-220 w/sf of density with a N+1 electrical redundancy level.

The project was awarded LEED-Silver certification for sustainable design and construction practices in September 2020. The project re-used the building core and shell and made surgical upgrades to accommodate its new data center functionality. This approach avoided the need to send significant volumes of waste to the landfill while also reducing the need for new materials. Throughout the construction process, 85% of all waste generated was diverted from the landfill.

The Phase 1 facility has demonstrated energy source savings of 14.9% and CO2 Emissions (in kg) savings of 63.3% when compared to a baseline building.

It has a class leading PUE of 1.25 and a cooling system design that uses no water. Data centers of this size typically consume a lot of energy and use thousands of gallons of water for cooling. TOR1 is designed to conserve enough water annually to supply 25,000 households.

Power cost is by far the largest expense for wholesale data center companies, considering the power consumed and the cooling costs associated with critical load consumption. A detailed analysis was undertaken to illustrate the return on investment and total cost of ownership of the highly efficient cooling solutions that were selected. 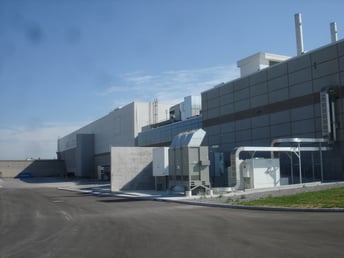 Morrison Hershfield was part of the design team that brought TOR1 to life. The collective efforts of Digital Realty, contractors EllisDon and HITT, Architect WZMH and Morrison Hershfield, resulted in a highly efficient facility. Due to the solid partnership developed by the AEC team, the same team was brought together on both Phase 1 and Phase 2 of the project.

“The team did an amazing job of coming together and delivering this first of its kind facility. We had a very aggressive schedule, with a lot of challenges. The building itself was very complex, since it was designed to house a newspaper printing process. The floor to ceiling heights and building profile varied greatly from one end to the other, and was not an ideal data center layout and elevation. The team successfully designed and constructed a highly efficient, world class solution that met Digital Realty’s needs.” – Jakub Pawelczak, Morrison Hershfield

Designing usable data center and infrastructure space within the constraints of the existing building footprint and structure was challenging. Compounding this challenge, the ownership change from Dupont Fabros Technology to Digital Realty midstream in the project increased the design and delivery complexities as the AEC team worked tirelessly to merge previous design guidelines with new standards. 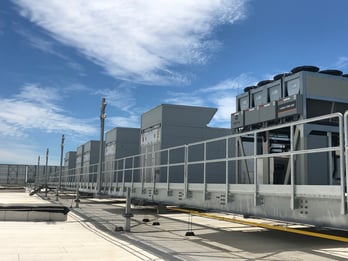 Managing the risks associated with the schedule and approvals process for build work was critical to the successful delivery of this project. To maximize speed-to-market, the team designed based on critical path, instead of a traditional design process. The project plan divided work into logical segments to facilitate parallel design and delivery efforts. This enabled the team to work around delays caused by lengthy approvals processes for “outside” equipment by moving ahead with the “inside” work like demolition, cleaning and reinforcing steel.

This is the second year in a row that a Morrison Hershfield designed facility was shortlisted for the Multi-Tenant Data Center Award. Last year, CloudHQ’s LC1A in Ashburn Virginia was up for the same award. Morrison Hershfield staff also won Young Mission Critical Engineer of the Year Awards in 2017 and 2018. We are very thankful to DCD for the recognition and opportunity to showcase our amazing people and projects. The 2020 DCD Global Awards celebration can be watched on demand here.