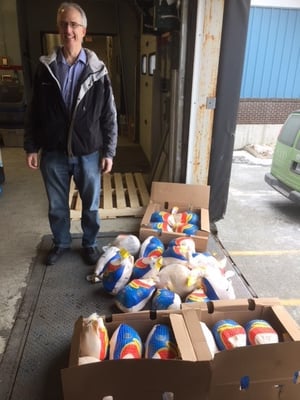 Our St. John’s office has once again made a difference for local families this holiday season.

The office may be small in size, but the hearts of our nine local staff are big!  Each year, they come together and hold a turkey drive in support of the local Community Food Sharing Association (CFSA).  Their efforts, combined with together with a matching donation from Morrison Hershfield, allowed them to donate 30 frozen turkeys this year.

Every year the CFSA collects more than
eight million pounds of non-perishable food and distributes it to local Food Banks in the Newfoundland and Labrador. Their mission is to feed the hungry and ease the struggles of the poorest in the province.

Morrison Hershfield is proud of our people, who consistently support their communities through contributions such as this.