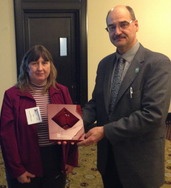 ​Morrison Hershfield is very pleased to announce the addition of Mr. Daniel Farrell to our team of P3 and procurement experts. His impressive portfolio includes 26 years of public sector experience, including five years of experience as a senior manager in the Light Rail Office in Ottawa, ON, ensuring the successful procurement of a $2.1 Billion LRT system.

​We have moved! As of February 1, 2014, the Winnipeg office of Morrison Hershfield can be found at 59 Scurfield Blvd., Unit #1, just down the road from our former location.

Construction is underway on a new artificial turf athletic field at the Edge School for Athletes in Springbank, AB. Morrison Hershfield completed site engineering, master-planning and an upgrade of the school’s existing soccer/football facility from a natural turf field to the “latest in technological development” artificial turf field. Working together with the manufacturer, a first-in-class sports field facility was created using FieldTurf’s newest product “Revolution”. FieldTurf Revolution was selected to ensure the delivery of a high performance field using a product with a proven history of success. The design of the field incorporates the Edge School logos at center field and in the endzones.

Morrison Hershfield is pleased to have been part of the promotional video recently released by Algonquin College for their new Bachelor of Building Science program. The video is available on Algonquin’s YouTube channel, and provides an overview of this well-rounded program designed to give students a better understanding of the holistic needs of the building design and construction process. Morrison Hershfield is pleased to announce that Catherine Karakatsanis has been named by the Women's Executive Network’s (WXN) as one of its 2013 Canada's Most Powerful Women: Top 100 Award Winners. Morrison Hershfield and Schöck, the international developer of innovative building products, issued a comprehensive report on the impact of concrete balconies on thermal and whole building energy performance.

​Over the past two decades, market forces have driven a surge in multi-unit residential building construction and conversion projects in the coastal areas of the Pacific Northwest from southern British Columbia down to areas of northern California.